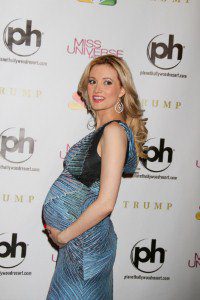 Putting new meaning into the phrase "pregnancy glow," happy mom-to-be Holly Madison looked radiant on the red carpet at the 2012 Miss Universe Pageant, which was hosted at the Planet Hollywood Resort And Casino in Las Vegas on Dec. 19.

Donning a remarkable blue evening dress that complemented her complexion and changing physique, Madison was all smiles as she showed off her growing baby bump and stellar pregnancy clothing in front of the cameras.

Madison is pregnant with her first child with fiance Pasquale Rotella. She recently announced that she's expecting a little girl, to be delivered in March 2013.

The 32-year-old rose to fame on the hit reality show, "The Girls Next Door," which chronicled her time in the Playboy mansion as one of three girlfriends to Playboy mogul Hugh Hefner.

After her split from Hefner, Madison went on to star in the Las Vegas burlesque show "Peepshow." Madison bowed out of "Peepshow" due to her pregnancy – now Coco, the model, television personality and wife of Ice-T, headlines the show.

When asked recently about whether she hopes her daughter will follow in her famous footsteps, Madison told In Touch magazine, "I think she can do better."

"You think it's this glamorous thing until you realize how much you're judged for it," Madison added about posing for Playboy.