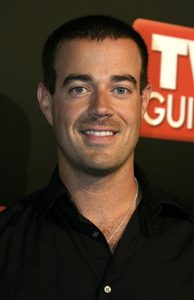 Carson Daly is one of television's most noteworthy hosts, thanks to his work on TRL and his long run on Last Call with Carson Daly. Still, it looks as though the current MC of The Voice will soon be busy with another round of diaper duty as he and his girlfriend, Siri Pinter, are expecting their second celebrity baby.

According to People Magazine, Siri confirmed the pregnancy on her food blog, "Siriously Delicious," posting a photo of herself showing off her bump at the beach wearing a tight navy tank top, a long purple skirt and an orange bangle bracelet.

"I am due [in] early September. We are beyond thrilled and blessed," she wrote in the blog post after joking about how the bump was due to a lot of extra baking. "I have been eating a lot of cookies."

The couple already has a 3-year-old son named Jackson James, and Daly has talked about how his recent segue into fatherhood gave him a new perspective on life and caused him to reevaluate his priorities.

In the coming summer months, we'll likely be seeing the happy family out and about enjoying themselves and preparing for a new baby in the fall!