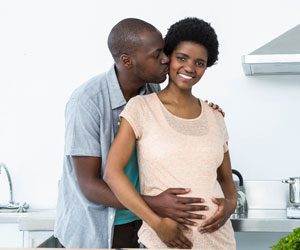 My friend Dan called me at work and I could sense the excitement in his voice. His wife was out of town with both their kids. Did I want to meet him at the sports bar tonight? The Bruins were playing the Canadians. The Celtics were wrapping up their regular season. And, drum roll please, the Red Sox and Yankees were on, too!

If there was ever a night for some serious male bonding over greasy burgers and cold beer, this was it. I said yes, before even checking with my wife, even though she was eight months’ pregnant, we had a toddler in the throes of her terrible twos, and, oh yes, our incoming baby was “frank breech”—both upside down and backwards in her belly.

When we married, we agreed that time with our friends was as important as time together. She had her singing, book clubs, and gym time. I had my running buddies and poker night. So she agreed to let me go, with one stipulation that would remind me of just how much my life had changed.

The next two hours were nirvana. Hockey here. Hoops there. Baseball everywhere. We talked sports as much as potty training, smiled at the cute waitress, groaned about real-estate prices, and rejoiced in our town’s new sandwich place. I completely forgot what awaited me at home, until the clock struck 10. A deal was a deal. I threw my money on the table and split.

When I got home, my wife sat down on the rug in our kitchen and handed me two black charcoal sticks the size of crayons. I lit the gas stove, held the sticks in the blue flame until the tips turned ash white, and sat down with her red-painted toenails on my lap. Moxibustion, as she explained to me, is a form of acupuncture that, when applied at the right pressure point, might help entice our baby to tuck its head and dive for the goal line in the proper position and save my wife from having a C-section. It was a little kooky for me, but I was no in position to argue.

So I sat there, holding the two sticks, smiling lovingly at my wife while still salivating about the beer I’d left behind at the bar. My mind wandered. If this works, I thought, and the baby turns, she’ll be so thrilled and I’ll have played a small part in her happiness. In the end, it didn’t work. The baby never moved and my wife had the surgery. When he’s old enough, our new son owes me a cold beer.

As for me, my buddies understood why I left them at the bar. They’ve got kids, too. In fact, that’s what made my night. I was able to still taste my past—trash-talking with my friends over beers, babes, and basketball—while embracing my present and getting home nice and early to perform a bizarre ancient Chinese ritual on my wife’s pretty toes. Even if it meant missing the ninth inning, third period, and fourth quarter.

— Doug Most is the editor of The Boston Globe Magazine.