Choosing a baby name is a big, exciting decision. Will it be James or Jaroslav? Elizabeth or Electra? Or any of the thousands of options in between? Here to help you make your decision is Vintagereprints.net, a cool — and oddly addictive — website. It shows you the popularity of any baby name, at any given moment in history. 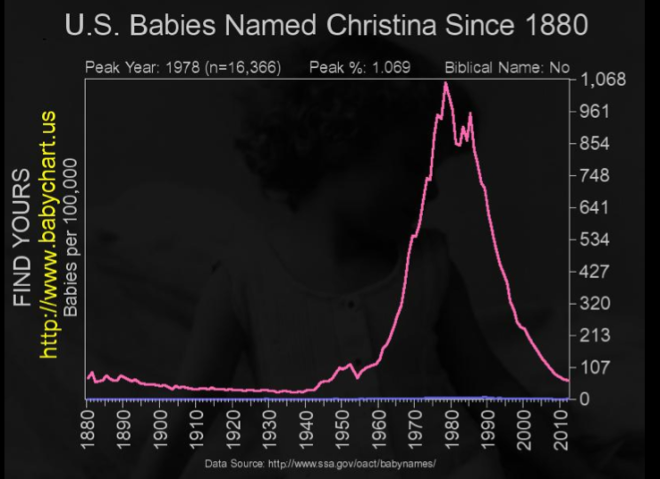 The site gives you need-to-know info in just a few seconds. Just type in the name you’re considering and it will take you to a chart that shows what year the name peaked and how popular it has been since. For example, the name Henry peaked in 1881, and in the year 2010 there were only 400 babies born that year with the name Henry in the United States. So, if you named your baby Henry today, there’s a good chance he’ll be one of a few. You can even look at a map of the United States that shows the year in which the name peaked in each State. If your name is Jessica, your name was most popular between 1970 and 2000. And if you live in Los Angeles, that name was the most popular in that state during 1987.
To read more about Lullabye Karaoke, head over to  Red Tricycle.

Red Tricycle is the fastest growing community for parents and parents-to-be. We believe that life should be a journey of delight and discovery so as fans of playful parenting, we offer ideas for cool things to see, eat, make and do with your kids. The end result is a curated list of events, services, and products that are really worth your time. Sign up for Red Tricycle’s newest edition, Bump + Baby here.

By Pregnancy Contributor
Pregnancy Magazine draws on a wide range of editorial sources including working doctors, midwives and doulas, as well as journalists writing about fertility, pregnancy and new motherhood.