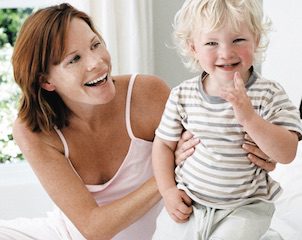 Just about the time when your baby’s personality blooms, so will the potential for tantrums. But Nanny Stella has the secrets for saving everyone from tears and frustration.

Your baby’s ways have just escalated from cute to unbearably annoying. Last week the bowl of cereal ended up on the floor three times in a row, and the cat has just been covered in milk—again. Or you tried to take away the TV remote and you can’t believe your eyes or ears having just witnessed your adorable “baby” throw his first major tantrum. And you’re asking yourself, What the heck do I do now?

What counts more than the actual tantrums or problem behaviors is how you handle them. The first thing you must do is ignore the behavior, which obviously takes some patience. But if you’re not buying into the routine, he won’t keep doing it. And often times we can prevent our little one from throwing a fit if we are able to prevent the situations that lead up to it. So how do you do that?

Read your little one’s cues to see if you can spot the trigger and help him calm down in advance. Yes, you’re exhausted, but you’ll save everyone—including your fellow shoppers at the grocery store—grief by staying one step ahead of your baby’s most basic needs.

The majority of these triggers come from lack of a schedule in baby’s life; so if you don’t have one, get one! Taking care of your child’s basic needs will help to avoid the tantrum triggers. My basic philosophy? Think about prevention rather than cure.

Although you are trying your hardest to not discipline your child, because you think he or she is too young, you are wrong and you will eventually have to discipline. There are going to be situations where distracting your strong-willed, highly curious, and maybe stubborn child will just not fly. But by discipline, I don’t mean scream and shout, shame, spank, or be mean and harsh. Discipline comes from the word “disciple,” which means to teach.

We must always remove our children from dangerous situations and stop behavior that is dangerous, that can hurt him or others. Your child has just hit you in the face, which has stunned you and made you angry. Do not hit back, put him in a safe place like his play yard (an early version of time-out) when you have calmed down, pick him up and say, “Hands are not for hitting. Hands are for hugging.” And give him a loving squeeze.

Always remember you are the biggest role model for your little one. If you want him to treat the cat kindly then you have to show him how to do it. Always narrate what you are doing. Although he doesn’t fully understand, he will eventually know that there are correct ways to do things. Teach your child what to do instead of what not to do and you’ll all live happily ever after—at least until the teen years.

—  Nanny Stella, celebrity family consultant, author, and star of Nanny 911, is well-known for her no-nonsense approach in helping families. Her passion is children—all ages, sizes genders, and ethnic backgrounds.