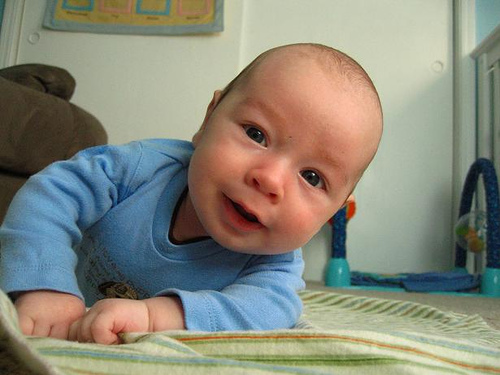 I planned a lot when I was expecting. So did my husband. We subscribed to all the magazines and read every possible published word on pregnancy. I knew the inner workings of each aspect of human gestation. We organized and charted and worked on getting our house ready for a baby; things went smoothly.

For all my planning, I had a relatively benign pregnancy—aside from carpal tunnel syndrome pain that kept me up nights—and I was convinced I would go to 40 weeks and beyond. When we had our ultrasound, it appeared that little Elliot (we’d already picked out a name) was snugly tucked into my right pelvis, using the placenta as a pillow. Yep, he would emerge only when good and ready, which meant I had a lot more time to gear up.

As the due date loomed closer, things were still pretty easy for me, even as my stomach became a gigantic balloon of baby that made me swoon in the Florida heat. The new school year began and my job in college administration became extremely busy. Elliot was slated to arrive on September 17, three weeks after the first day of school. It was imperative that I hang in until at least the second week, when things would calm down.
I joke now that my son must have been listening to my thoughts, but instead of hearing “second week,” he heard “second day.”

On Tuesday of that first week of school, I began to feel some cramps. I had just reached 37 weeks and figured I might be having some minor Braxton-Hicks contractions; the baby had definitely dropped lower into my pelvis, squeezing my bladder into a tiny marble with about the same liquid capacity.
Around 8 p.m., I became a statistic—one of the 15 percent of mothers whose water breaks spontaneously—and I was absolutely certain I was in labor. I was also completely unnerved.

Scrambling for something to protect my clothing and, soon thereafter, my cell phone, I suddenly remembered a brief exchange with my husband right before he left for flag-football practice that night. “I’m not going to take my phone,” he said, while grabbing his cleats. “Yeah, I doubt you’ll need it,” I replied.Thankfully, I tracked him down via our friends, and he was able to rush home. We headed to the hospital, where they checked me and said I was just 1 centimeter dilated.

Thirteen hours of labor later, Elliot Michael finally entered our world, healthy and happy. As I called the office from recovery to apologize, my co-workers reminded me that nothing to do with pregnancy can be planned, no matter how many books you read or websites you consult. I had been so worried about leaving work that I wasn’t appreciating my newborn son. But once the nurse passed his swaddled little body in the blue-and-pink-striped cap to me, I forgot about all my plans.

Claire Smith lives in Tallahassee, FL, with her family.