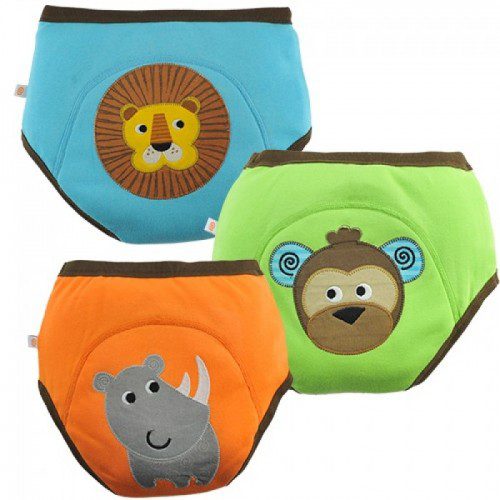 Potty training can be a trying experience for both parents and kids, so when we embarked on the journey with our 2 year old son, we braced for the challenge. Now, I’m not going to lie – after several months, we’re still working on it – but having the right equipment for the task has helped make the experience more enjoyable for all involved. Among our favorite potty training aids: Zoocchini’s adorable line of organic cotton training pants.

Essentially underwear with extra padding to buy some time for early potty users to make it to the bathroom, Zoocchini’s “My First Pair of Underwear” is both cute and functional. Available in bright color combinations that sport playful animals, they make wearing underwear attractive, which is an important first step in weaning little ones out of their diapers. As soon as my little guy saw his Zoocchinis, he couldn’t wait to put them on. He even tried putting on multiple pairs at once. Imagine being that excited about underwear! And, he wasn’t the only one enamored with Zoocchinis. Upon spotting the cute lion on my son’s rear, his baby cousin immediately reached up to snatch them right off of him. Luckily, this was the only occasion when his underpants slipped off. Otherwise, they fit great – snug enough to keep everything that’s supposed to stay in in, while remaining comfortable.

Within 20 minutes of wearing his Zoocchinis for the first time, my little boy soon learned that they didn’t work quite the same as diapers. He stared in amazement as liquid trickled down his leg. I’m thankful that the extra thick and absorbent underwear slowed the flow a bit, while still giving him a lesson in cause and effect. He was obviously in awe with this, as he tried the same trick again 20 minutes later while staring at the bottom half of his body. Luckily, this game grew old quickly, and he soon after learned to hold it and run for the potty.

Each set of Zoocchinis comes with 3 pairs of underpants, each with a different color and animal. They offer separate girls and boys styles, with 2 animal sets offered for each gender, but I don’t believe there’s much difference other than colors and types of animals. So, if your little girl prefers the “boys” style or your little boy favors the “girls” style, go for it. Alternatively, buy both so you don’t have to do laundry as often.

The underpants are comprised of breathable organic cotton with a layer of highly absorbent double-sided terry cloth between the cotton layers. They wash well and still look great after several times through the laundry. Start with size 2-3 for kids 26-33lbs and then move onto size 3-4 for kids 30-37lbs. Once kids are ready to transition out of their training pants, they can graduate to Zoocchini’s underwear line.

Zoocchini’s “My First Pair of Underwear” is available on Zoocchini for $31.99 (3-pack).