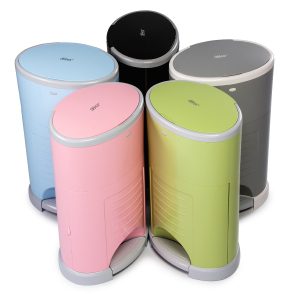 Where there are babies, there will be diapers. While the smell might be tolerable for the first several months of infancy, once your baby starts eating solid food, it’s a whole other realm of nasal suffering. Depending on how often you change the trash and whether you use cloth or disposable diapers, you may invite a lingering stench to the nursery or your kitchen’s garbage bin.

That’s why many moms-to-be choose to pick up a diaper pail to save their sense of smell. Luckily, these products are scientifically designed to minimize odors and prevent that diaper stink from spreading. But are they really that much better than regular garbage bins? And what’s the best kind?

The differences between diaper pails vs. regular trash bins

Diaper pails and your average trash bins both do the same thing: contain trash until you’re ready to put it on the curb for the garbage truck. But the way they seal the contents is very different.

A diaper pail typically offers a tighter seal on the lid compared to a regular garbage can, which makes the pail better at containing odor. Many are also made of metal or special plastic, like acrylonitrile butadiene styrene plastic in Dekor’s pails, which doesn’t absorb odors like most plastic trash bins, which are usually made of cheap polypropylene.

Some pails use regular trash bags, but many have their own special liners meant to minimize smells, some of which are scented to offer a more pleasant aroma or double-lined to prevent leaks. Several types also use air filters to eliminate excess odor.

Many pails even make it convenient for moms to throw diapers out with one hand while supporting their baby with the other, a feature some trash bins simply can’t compete with. The Diaper Genie even minimizes having to touch the pail, too, with a built-in cutter that cuts the bag for you. There are even motion-sensor models that open at the wave of a hand.

Diaper pails on the market

Many types of diaper pails exist, and the price ranges can be pretty wide. The market includes affordable $20 types to higher end models costing around $60. Keep in mind that some models that might seem affordable at first also require special liners, which can run you about $5 for 20 – and you’ll probably go through a lot. This is more than a typical box of trash bags. Environmentally friendly liners exist, though, like the ones from Planet Wise, which are washable to reduce waste.

While some brands’ products are blatant diaper pails, other companies design their pails to blend in better with a classic baby nursery, like Ubbi pails. These sometimes offer cute colors and even decals to enhance the decor.

Material is an important consideration, too. Unabsorbent plastic or metal pails are long-lasting – something to keep in mind if you’re planning to have a second child. Diaper pails also come in a range of sizes, which will dictate how often you empty them.

But are they worth it?

It depends on how long your trash sits in the house. Families who empty their trash on a daily basis (like those in small apartments) might not need to worry about purchasing a diaper pail. But if you tend to wait a few days before taking your trash to the dumpster, it’s probably worth it to get a diaper pail.