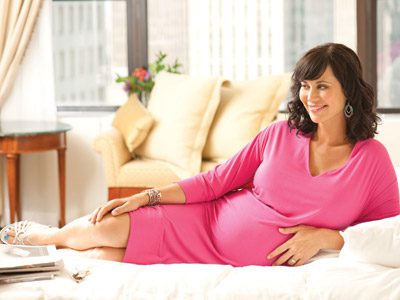 This self-described “tough chick” is exploring new territory with her second child (a boy!) due in August. The former JAG star—now in her fourth season as Denise Sherwood on Lifetime’s hit drama, Army Wives—is a busy woman on screen and off. But instead of pushing the high-risk envelope, Catherine Bell lives a more leisurely lifestyle in Charleston, SC, with husband, Adam Beason, and their 7-year-old daughter, Gemma. Halfway through her pregnancy, the 5’8½”, London-born actress has gained just 14 pounds and hopes to stick to a total gain of 30, as she did with her first. Here, exclusive to Pregnancy, the 41 year old talks morning sickness, motherhood, and much more. 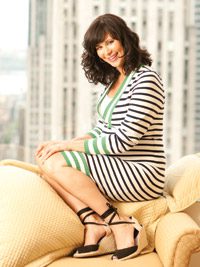 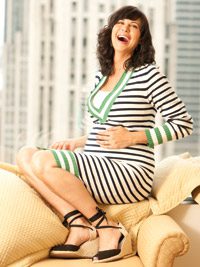 Isabella Oliver Pippa Sweater Dress in Navy/White Knit, $229, isabellaoliver.com; Ingrid & Isabel Everyday Cami in White, $32, figure8maternity.com; Target Gold Over Silver Large Hoop Earrings, $20, target.com; Enzo Angiolini Ea Almber Espadrille in Black, $79, endless.com
Is this pregnancy different than your first, when you were 34?
It’s interesting and so different. I wonder how much of it has to do with my age. I didn’t feel pregnant with Gemma. I was working 18-hour days on JAG and felt great—no tiredness, no morning sickness, none of the symptoms. This one is totally different—I’m exhausted and I need naps often. I had nausea for about a month, which was really no fun. There are more tests and a little more worry. On the other hand, I’m more relaxed and not reading every book on pregnancy and babies like I did before.

Did you have an amniocentesis?
I had the CVS [chorionic villus sampling], which you get a little bit earlier. So we did that and that’s when I found out it was a boy with all the right chromosomes. So far, so good.

Are you taking any special precautions this time around, or do you have a more relaxed attitude because you’ve been through it before?
I’m still working. There are times I’d much rather relax, nap, and put my feet up, but I can’t because I have to be on set at 6 a.m. or whatever. I think I’m pretty much doing the same. I’m eating healthy, yet allowing myself some treats here and there. I’m trying to work out a few times a week. Actually, I feel better when I do work out.

You’ve always been active—from bungee jumping to golf. What is your fitness regimen now?
I’m a little less active, probably just because I’m running around with Gemma, so I have less time to go to the gym. Buwt I have a goal of exercising three to four times a week—sometimes it’s a little less, but I try to do something. It might be a bike ride, a long walk, the gym and do weights, or Pilates, or treadmill incline…something.

Were you trying to get pregnant, or was this a total surprise?
We were totally trying. I conceived pretty much naturally. We wanted this to happen quickly. We used Clomid, which helps you with a little boost and the second month we tried, we got pregnant. 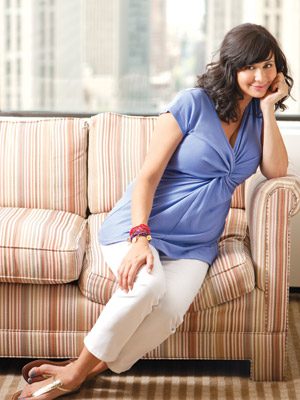 LA Made Maternity Knotted Front Short Sleeve Tee in Lavender, $44, barebellyboutique.com; Maternal America Skinny Ankle Jeans in White, $106, zappos.com; Old Navy Women’s Fashion Cuff Bracelets, $13 each, oldnavy.com; Sam Edelman Gigi Sandals in Gold Boa Print, $50,
Where were you when you found out the good news?
We were really monitoring it closely because my husband wrote a script that we’ll make around October this year for Lifetime. It’s an exciting, action-packed script and I’m starring in it, so I really wanted to get pregnant and give myself enough time to recover…no pressure! (Laughs.) We found out right away and went to the doctor’s office to check it out, which was right before Christmas. It was my Christmas gift. We ended up telling our moms and my daughter probably much sooner than we normally would have, but it was Christmas.

Were you nervous how Gemma might react when she heard she would have a sibling?
Well, she has been begging us for a sibling for two years; she kept asking us when are we going to have a baby? So she was absolutely thrilled when we told her. We actually have a video of her on my iPhone of just screaming and jumping around.

And how did you break the news to your Army Wives’ producers?
I emailed the ultrasound picture to the producers. I was already showing. I began popping out really early; I guess that’s normal. I had a wardrobe fitting and realized I’m going to have to tell them or they’ll think I’m just gaining weight. (Laughs) So I told them, and everyone is very excited for me.

You’ll have about two months to recoup before you begin filming the Lifetime movie?
Exactly. I’m trying to give it at least 10 weeks, because I can’t work out for 6 weeks after a C-section. I have a planned C-section. I had one with Gemma, and we decided to go with it again. I had a great experience the last time around.

Any cravings?
I’m craving food—lots of food. Not so much sweets but carbs….nice, thick, rich pastas and breads. Mexican and Thai food and all that stuff.

Has your diet changed since you got pregnant?
Oh definitely. Mostly just in the quantity. I’m still
trying to eat a ton of fresh vegetables and fresh fruit, lean meats…good stuff, but peppered with Mexican food or some other food that’s bad for me every once in awhile. The heartburn has already started, so I try not to have spicy foods.

Since one of your favorite times of the day is after Gemma goes to sleep and you have that little window of quiet time, how do you anticipate your upcoming “me time” with an infant in the house?
(Laughs) I have no idea. Every once in a while my husband and I will stop and think about that and say, “That’s going to change soon.” Maybe that’s why we waited so long, because Gemma is getting more mature and more responsible. All of a sudden, we’re thinking, Oh man, we’re going to have our hands full! My mom is here, which is fantastic and she’ll help a lot. My parents sold their house in Los Angeles and moved [to Charleston].

We built a home theater in one of our bedrooms with a big screen and loud booming sound, so when Gemma goes to sleep my husband and I will go watch half a movie because I can’t stay up late anymore, but I like doing that at the end of the day.

So how would you describe the Catherine Bell of today?
Easygoing…I’m not easily ruffled. Happy. Fun-loving.