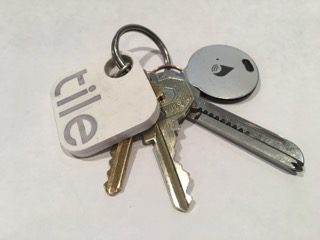 From what I can tell, all pregnant women have it. You may have heard older people refer to it as a “senior moment” and joked about “losing your mind” yourself when you can’t find your keys, but “pregnancy brain” is different. During pregnancy, most women experience moments where the brain just doesn’t fire the way you’re used to it working. Whether you call it pregnancy brain or “momnesia,” most women just roll with it. Usually, the memory lapses are small and insignificant, like losing your keys or forgetting your phone.

This is where the new Internet of Things (IoT) can come to the rescue, turning what might be a frustration into a quick solution. We tested four tracking devices out on the market to let you know the best ones to help you find those keys in the short order: 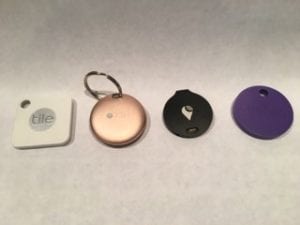 Basic trackers are small devices usually round that look like a keychain fob. While some of the companies are making variations on the devices to stick in a wallet or even on eyeglasses, the size of the required battery drives the the size and most are about an inch in diameter and about 1/8 inch in thickness. They all work using Bluetooth to pair with your iOS or Android device but also to create a network of connected devices that over time promises to make device retrieval easier. Tile, with over 5 million devices sold, promises the largest network.

When working correctly, all of them show your device on a map. All can activate a tone on the tracker so that you can find your keys more easily in the house. The tone for all of them is 85-92 decibels with latest TrackR version stating the highest volume setting and the Orbit with the lowest. However, don’t expect a very loud noise. Due to power requirements, they are not loud enough to be heard more than across a room. In our tests, I found the Tile to have the loudest audible sound.

The Chipolo claims the longest range at 200ft (60 meters) from your phone or tablet.  The others have a range of around 100 feet. My TrackR Bravo said its range was 82 feet and that range might be adversely affected by adding other Bluetooth devices in the area. When out of range, you have to count on the crowd-sourcing network effect to find your device. This will obviously be easier in denser populated (and tech-savvy) areas.

All will also call your phone even on silent mode, if you have the tracker in your hand as long as the app is open.  All except the Tile also allow alerts for when you go more than 100 feet from your tracker, especially useful for those who walk out the door phone in hand but having left the keys on the counter.

Bluetooth trackers work on Bluetooth 4.0 which allows for very low energy usage when staying in contact with you and even chirping when lost or when out of a particular area. All promise the use of crowdsourcing to help find lost objects. TrackR even has a funny viral video of a bike they intentionally “lost” so that they could refind it using a TrackR glued under the seat (1.4 million views!). In the video, they refer to this as “crowd GPS,” but it isn’t really GPS since that would imply a cellular based tracking device. In the case of all the trackers, they depend on other tracker owners walking within 100 feet of your device with their tracker apps open on their device to catalog your tracker’s whereabouts. Face it: even in New York City, that’s a pretty tall order, but with 4.5 million TrackRs and 5 million Tile trackers out there, there is a long term potential for crowdsourcing to become meaningful. In the short term however, the trackers work best at telling you the last place your keys and phone were together. Hopefully, before someone walks away with them.

The price of all these trackers is affordable, each costing around $20. They make a great gift and it only takes one loss of keys (or glasses case) for it to seem like money well-spent. Unfortunately, all except the TrackR need to be completely replaced after approximately one year of use. They all have reduced cost replacement programs, but a $20 price tag really means another 50% of the cost every year to keep using them.  This might also seem a small price to pay, and also familiar to anyone buying technology today. You have to be prepared to pay something up front, and if you like it, be prepared to upgrade every year or so. (Prices below from Amazon)

All install by adding their app. Pairing is fast and simple and all allow you to name your tracker with something like “Paul’s keys” if you want, as well as to categorize your item if that has a value.

Some of the trackers can be used by multiple people at the same time. Just pair them with a second user’s app. The Orbit does not have this feature.

Aside from finding your keys, all the trackers work in reverse to help you locate a phone. By shaking the Chipolo, or pushing a button on the TrackR or Tile, your phone will make a distinctive ring, even when in silent mode. As a guy who usually has his keys in his pocket, I use this feature every few weeks to quickly find my phone which is almost always in silent mode.

All are available in a variety or colors. All claim to be water or splash-resistant. The Orbit and TrackR are made of aluminum and the Chipolo and Tile are plastic.

HOT TIP: Only the Orbit has this added feature – you can pair it to be a selfie remote for your phone.

All the device manufacturers I spoke to cautioned against using this type of device to track pets or even children. While you could put a tracker in your child’s backpack to have an idea of where it is during the day, trackers are not meant to follow objects or people on the move, and for that reason are even worse for tracking potentially fast-moving pets. Consider devices like Whistle, which works using cellular technology, for tracking wandering dogs and cats.