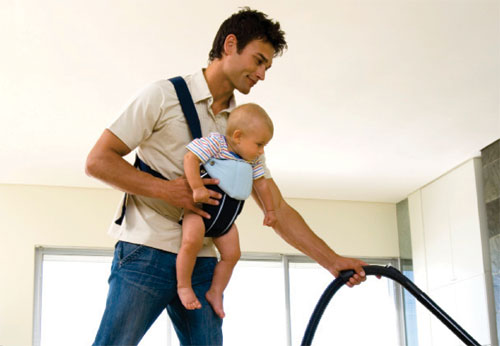 If you grew up in the 1970s or ‘80s, chances are the answer to all three is “Mom.” Dads were important, sure, but for most of us, they weren’t day-to-day parents. As a result, we didn’t know them quite as well (what exactly did they do all day?), and they didn’t know us (could they even name our friends?) as well, either.

Here’s where things have gotten interesting. In the past 10 years, there has been a sea change in how we define a “good father.” We now expect dads to be involved in their kids’ lives in a way fathers have never been before. And we expect this of them even though they lack the luxury of role models, flexible workplaces, or a whole lot of instruction.

The great news is that being an involved father brings a wealth of riches- to kids, to moms, and most especially to the dads themselves. But what are we expecting of them, exactly? And is it possible that they might even be better at this parenting thing than us?

How Did We Get Here?
What explains this evolution of the species? Three words: the women’s movement. Once moms began working, it became a lot more difficult for any dad shirking family time to hide. Pop culture has also helped the cause. In 1972, Free to Be You and Me gave us messages of gender equality. Seven years later, Kramer vs. Kramer gave us a divorced dad who wins custody of his son; and in 1984 the message was completed by The Cosby Show, featuring Dr. Huxtable as a WAHD (work-at-home dad) and wife, Claire, as a high-powered attorney.

This shift toward involved fatherhood happened not because men stormed the barricades, but because they kind of…um, didn’t have a choice.

“This was started by women,” says John Badalament, author of The Modern Dads Handbook and director of the PBS documentary All Men Are Sons. “But it’s also because when Gen X-the first generation in which divorce and latchkey kids were commonplace- became parents, there was a critical mass of men who knew what they didn’t want, even if they couldn’t say what exactly they did want.”

Dads used to be expected to provide for their families financially. But in the course of a generation, they now need a whole new set of skills. “It doesn’t hit you until you have your first kid. Suddenly you run into a completely reinvented role for men, and it’s one you don’t have any preparation for,” says Clay Nichols, co-creator of dadlabs.com and co-author of the new book DadLabs Guide to Fatherhood, Pregnancy, and Year One.

This accidental second sexual revolution-connecting men to their nurturing, caretaking sides-is still in progress. “If women have traveled the road leading from the home and into the world of work, from the qualities of caring and nurturing into the world of assertiveness and strength, men have just begun traveling the road from work to home,” Badalament says. “But most guys see that they have an opportunity their dads didn’t.”

The Here and Now
Dads are more involved in their kids’ lives than they were even 10 years ago. It’s no longer unusual to see men holding babies in a front carrier, changing a diaper, or at story hour. According to the US Census Bureau, there was a 62% increase in the numbers of stay-at-home dads between 2003 and 2006. The National Center for Fathering found that between 1999 and 2008, there were big increases in the percentage of dads who take their children to school, attend class events, help their kids with extracurricular activities, and attend parent-teacher conferences.

But the parenting distribution in most families is still far from even-steven. Time-use studies have found that women are still doing about 70% of the housework. “The norm is probably a guy who helps, who’s doing way more than his dad ever did, but certainly not as much as his wife is doing,” Nichols says. “Dad might be doing twice as much as his father, but half as much as his wife expects. He thinks she should be grateful, but instead she’s pissed off.” 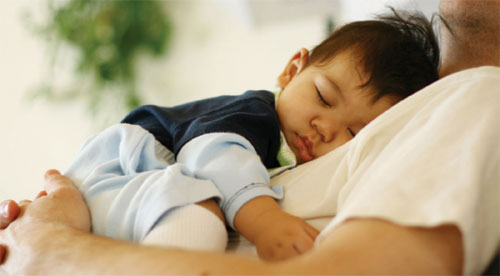 He’s A Product of His Environment
So why aren’t all men getting with the program? Top of the list is that too few men were raised with the idea that they should be preparing for fatherhood – as opposed to girls, who are given dolls and instructed in the fine art of nurturing. The first baby Will Craig ever held, for instance, was his own newborn daughter, just moments after being born.

Just like moms, dads have also come to see that “having it all” isn’t always as fabulous as it sounds. “I’m supposed to be at the pinnacle of my career, but this is also the moment that the kids are little, and need the most one-on-one care,” Aron says. Jeff, who was writing his dissertation when his daughter was born, says trying to balance his two realities was stressful. “I don’t want to idealize just how much work it is to take care of the kids,” he says. “It’s a full-time job.”

If all of these challenges weren’t enough, dads also have to deal with attitudes from those who haven’t quite caught the wave. “I’d go into a coffee shop with my infant son, and get really helpful advice from the ladies who thought as a dad, I couldn’t quite hack it,” Nelson laughs. “They’d say to the baby, ‘You’re so cute! Say, ‘Daddy, I want some socks! Oh, Daddy-I’m cold!’” But Nelson says that you have to just roll with it. “So much of raising kids is funny,” he says.

Why It’s Worth It
Make no mistake: Dads have a profound impact on their kids’ lives. Pick a concern, any concern: street gangs, teen pregnancy, dropping out of high school, substance abuse. Experts say each problem improves when an involved dad is in the picture. And there’s no doubt that fathers help boost their children’s grades. A study by the U.S. Department of Education found that students whose fathers were highly involved at school were 43% more likely to receive A’s, and were 55% more likely to enjoy school than those with uninvolved dads. 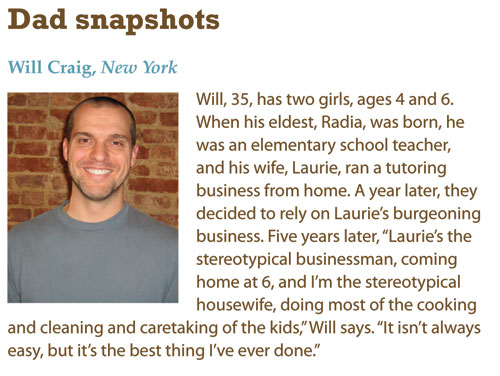 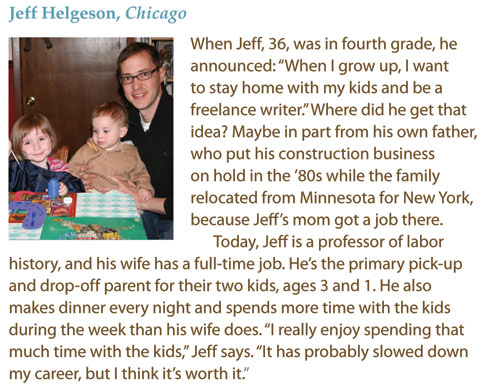 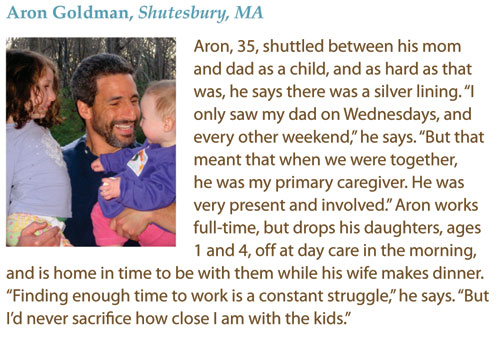 But what about all those unpleasant chores? Sure, he can take Junior to the park, but does it really matter if dad is involved with cooking and cleaning? Yes. A recent University of California, Riverside, study found that school-aged kids who did housework with their fathers are more likely to get along with their peers, less likely to make trouble at school, and are less depressed or withdrawn. The theory is that when kids see their dads take car of housework, they learn cooperation and “democratic family values”- in other words, that we’re all in this together, and no one gets out of doing his share.

If that isn’t enough, it turns out that being close with the kids is also good for Papa. A National Institute of Mental Health study found that when fathers were actively involved in their children’s lives, those fathers experienced fewer accidental deaths, fewer premature deaths, less substance abuse, and fewer hospital admissions. And as for the housework, research out of the family studies “love labs” at University of Washington demonstrates that when husbands contribute more domestic laor, their wives interpret that work as a sign of loving and caring- and are more likely to get “in the mood.” Not a bad domino effect, especially for those postpartum months!

What Can Moms Do?
The chances of a dad succeeding at being intimately involved in his kids’ lives are much better if his wife is behind the mission, Badalament says. “For a dad to know his child, the mother has to allow dad in,” he says. To that end, here are some ways to do that:

Lay off. Does he dress the baby in mismatched clothes? Forget to plug in the humidifier in her room at bedtime? Leave the diaper bag at home and “wing it” on an outing? Let it go. Either he learns on his own that your system works better, or he invents a system of his own. By harping on him to do it “right” (meaning your way), you’re undermining his confidence in being an equal parent.

See him as your equal. Even if scheduling demands mean that he doesn’t have as much time with the kids as you do, try to give him the information he needs to be up to speed. Don’t be greedy about your primary caregiver role-share it.

Speak up for what you want. Instead of complaining, or just resentfully doing something yourself, Badalament says you should own your expectations. “Say, ‘It’s important to me that you spend time with our children.’ If dad isn’t living up to certain realistic expectations, it’s time for mom to get it on the table in the healthy way. Don’t nag, ask,” he says. 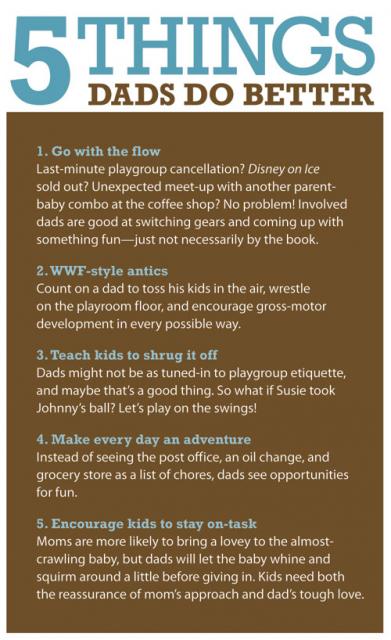 What Can Dads Do?
According to Badalament, there are three basic lessons dads-to-be should follow:

Know and be known. “Know” means that dads today should strive to be experts about their kids- everything form their daily schedule, to the best way to get them to sleep, to the sweetest ticklish spot under their chins. And “be known” means that it’s up to you to be yourself with your kids. “We gave up the mystique that dads of a different generation had, disappearing to the study to drink whiskey,” Nichols says. “Dads today are right there, in sweaty T-shirts, doing bedtime. Our kids trust us fully.”

Talk about where you’re coming from. Put your experiences with your own dad into words. Make sure you and your partner both understand just how much, and how little, you want to recreate the dynamic you had with him.

Don’t just be “the fun dad.” When fathers don’t have as much time with their kids as moms do, they may choose the “good cop” role, leaving “bad cop” to mom. “If you want your child to learn from you, and to rely on you, you have to set reasonable limits with them,” Badalament says. For dads with infants, this means not keeping the baby up late just so you get to play with her after work, for instance.

Emily Bloch has also written for Real Simple and Marie Claire. She’s blessed with a husband who knows just as much about baby poop as she does.