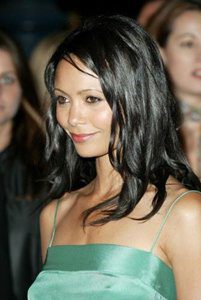 Actress Thandie Newton is well-known for her roles on both the big and small screen, but for the star, the most exciting coming attraction is her new baby!

Newton has appeared in such films as "W.," "The Pursuit of Happyness" and "The Chronicles of Riddick," as well as the hit television show "ER."

The 40-year-old star is already a mom to two daughters, 13-year-old Ripley and 8-year-old Nico, with her husband of 15 years, writer-director Ol Parker.

"She couldn't be more happy," a source told Us Weekly magazine about Newton's pregnancy. "You can barely tell she has a bump and she's been dressing different because of it."

And it's true – the typically stylish mom had no baby bump whatsoever during a recent appearance to promote her new film, "Half Of A Yellow Sun," at the Toronto Film Festival.

Wearing an alluring monochrome dress by celebrity designer Stella McCartney, Newton looked remarkable, but her bump was hardly on display at all! Nevertheless, with her stellar sense of fashion, this radiant mom is sure to show off some of the most chic maternity clothes around in the coming months.