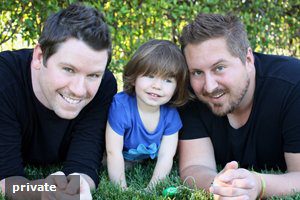 Scout Masterston and Bill Horn didn't plan on becoming such devoted cheerleaders for the adoption process.  The duo – who were introduced to the world via Tori Spelling's reality series "Tori and Dean: Home Sweet Hollywood"– were certainly accustomed to media attention, but often played second fiddle to the protagonists on the show.

Still, when a beautiful little girl named Simone Lynn entered their lives in 2010, the couple realized it may be time to stand front and center.

"We feel like we had an amazing adoption journey with Simone and we [would] like to share our story so others out there thinking of adoption know that dreams of becoming a parent via adoption really do come true," says Masterson.

He and Horn are currently spreading the word of their adoption mentoring service, Hold My Hand, which was launched in November 2011 in order to coincide with National Adoption Month. The nonprofit organization offers support for prospective adoptive parents, including where to locate a birth mother and tips on furnishing a nursery.

Masterston admits the passion project came to fruition after realizing hopeful parents were forging an unforeseen connection with he and his husband.

"People saw us adopt on national television, and started to send questions about their own experiences and journeys on our Twitter and Facebook [pages]. We like that we're approachable in that way."

Their story is certainly one that has inspired the masses. The proud papas – better known as "The Guncles" by fans of the Oxygen series – exchanged vows in a 2009 commitment story and soon decided to expand their family from two to three. Together they agreed that adoption would be the best route for bringing a bundle of joy into their lives.

The couple then allowed viewers to bear witness to the emotional rollercoaster often associated with the process, with the highs and lows of their odyssey documented each week on the show. Their journey culminated with Simone's official adoption in February 2011.

Masterson took the time to gush that the brown-haired, blue-eyed cutie is now nearing her third birthday and is as energetic as ever.

"She's potty trained and has started spelling smaller words," he explains. "She'll bust out into a 'T-O-Y spells TOY' song at any given moment. We're constantly amazed by her attention to detail and her creativity in playing."

The couple is also currently looking to give Simone a sibling, but Masterson admits they aren't in a huge rush.

"Above all, we truly believe in the saying 'Your baby will find you," he says.