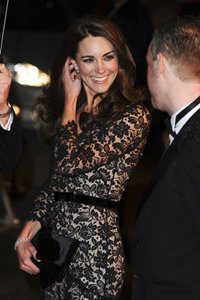 The Duchess of Cambridge, Kate Middleton, is due to give birth to her first child any day now. The baby, who will be third in line to the throne of Great Britain, has incited excitement around the world as the international community waits with baited breath for the little guy's or gal's arrival – he or she will be able to trace the family lineage all the way back to William the Conqueror!

But in addition to questions about the baby's gender (which have had spectators clamoring for months) and what the happy royal couple intend to name the bouncing bundle of joy, there's one big, lingering curiosity in the minds of onlookers: Will Middleton be breastfeeding?

The royal family has a remarkable history of breastfeeding that stretches back through the ages. Breastfeeding was typically shunned by those of the nobility, with babies being given to wet nurses for care after delivery.

Royal delivery
During previous centuries, women who served as queen consorts were viewed as responsible for continuing the royal dynasty, and thus, after the delivery of a healthy baby, were often encouraged to quickly heal and produce another heir. Throughout periods of high infant mortality, more infants born to the ruling monarch could ensure that a line wouldn't die out, and as a result, royal women were tasked with becoming pregnant again as quickly as possible.

Breastfeeding, which requires a mother to be more hands-on with her offspring and dedicate time to developing a structured feeding schedule for infants, could be viewed as a hindrance to this for royals. As such, wet nurses served a vital purpose.

However, in the 20th century, breastfeeding became more popular among the British royal family. Queen Elizabeth II, who was born in 1926, was breastfed by her mother. In turn, she breastfed her own children. Princess Diana of Wales also opted to breastfeed her children, Prince William, the Duke of Cambridge, and Prince Harry.

Getting ready for baby
In June 2013, Beverly Turner – a British television presenter – publicly encouraged Middleton to choose breastfeeding for her child, as this has decreased in popularity across Great Britain in recent years.