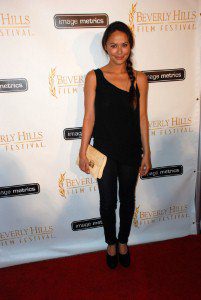 The couple opted to wait to find out the gender of the baby, and were in for a real surprise when they welcomed their daughter, whom they named Pepper, into the world. Bloodgood and Hall married in August 2011.

"I know now what happiness feels like," Bloodgood told KoreAm in September 2012. "Everything just looks brighter, the world just looks sunnier. I think it's the hormones or something because I feel fantastic."

Bloodgood stars on the TNT series "Falling Skies," and has garnered critical acclaim for her role in the indie film "The Sessions," which also stars William H. Macy, John Hawkes and Helen Hunt.

Bloodgood has also received attention in the past from men's publications such as Maxim magazine and looked absolutely radiant during red carpet outings throughout her pregnancy. Donning a chic, pewter-colored shift dress at one event, Bloodgood showed off stylish pregnancy clothing during each trimester.