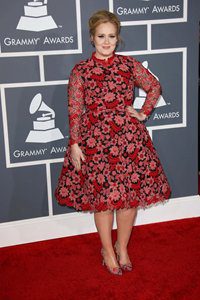 British singer Adele and her boyfriend Simon Konecki welcomed their first child – a baby boy – back in October.

While the couple has stayed mum on the topic of their little one, the “Skyfall” crooner divulged some news about her burgeoning family at the Grammy Awards.

“I’ve been having lots of meetings and I’ve been out of the loop really,” the singer told reporters at the Grammys on Feb. 10. “I’ve been singing my baby nursery rhymes so I don’t really know what’s cool and what’s not.”

Despite the singer’s protestations to the contrary, she looked positively fashion-forward and chic at the event. Arriving in a vibrant floral dress that conjured up the energy of spring time, Adele’s ensemble could be a great source of inspiration for mothers-to-be in search of the best evening maternity dresses.

Nor is this the first time that Adele has marveled spectators at the Grammys. She won six awards in 2012, including Song of the Year for “Rolling in the Deep” and Record of the Year.

She also recently won a Golden Globe for the hit song, “Skyfall,” which is the theme of the critically acclaimed James Bond film of the same name.