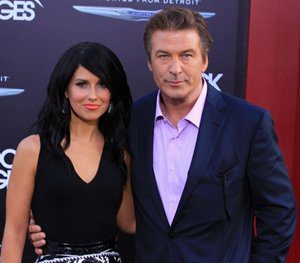 Actor Alec Baldwin, who is well-known for his appearance on the former hit television series "30 Rock," and his wife, "Extra" correspondent and yoga instructor Hilaria Baldwin, recently welcomed their first child.

Born on Aug. 23, Carmen Gabriela Baldwin is the couple's first little one together. Baldwin, who was previously married to actress Kim Basinger, also has a 17-year-old daughter, Ireland.

"We are overjoyed to announce the birth of our daughter," Hilaria, 29, tweeted after the arrival of Carmen. "She is absolutely perfect."

For Hilaria, who spoke openly of her cravings for citrus during the pregnancy, the baby's birth means an end to the stylish maternity clothes she donned throughout each trimester.

One of the most striking ensembles worn by the then mom-to-be included a black and white snakeskin dress with spaghetti straps that really helped accentuate her growing bump.

Meanwhile, although the proud father noted that he's looking forward to being a stay-at-home dad, Hilaria revealed her doubts during a recent interview with People magazine.