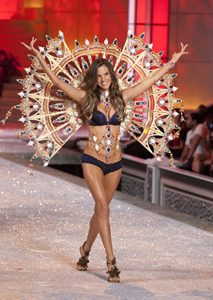 Brazilian model Alessandra Ambrosio managed to keep her pregnancy a secret throughout most of the first trimester, even walking in the Victoria’s Secret Fashion show proudly baring her belly without anyone noticing that she was expecting.

Ambrosio and fiance Jamie Mazur already have a 3-year-old daughter Anja Louise, who is seen touching her mom’s subtle baby bump at the beach in a photo released by the leggy lady. The picture was snapped in her hometown Florianopolis, Brazil. The 30-year-old model announced the pregnancy on Facebook in an English and Portuguese post.

“Anja, Jamie and I are overjoyed and extremely appreciative of all the wonderful wishes we’ve received!” she gushed. “Anja has filled our lives with love and we can’t wait to welcome the new baby into the family this spring!”

The glowing expectant mom considered pulling out of her commitment to walk the Victoria’s Secret show, but decided to hit the runway wearing bejeweled lingerie without any mention of her pregnancy. Ambrosio has participated in shows for the legendary international brand since 2000.

As a working mother, the Brazilian beauty told People magazine that having a schedule and the support of others is key to managing her myriad responsibilities. During the interview, which occurred in the spring, she confirmed that she “definitely” had plans to expand her family.

Ambrosio and Mazur, a Californian businessman, have been dating since 2005. With baby number two on the way, Mazur may need to improve his Portuguese!