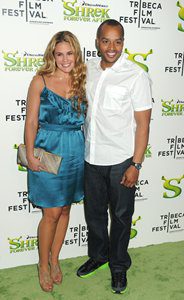 Looks like singer Jessica Simpson and her longtime pal CaCee Cobb will have something new to gab about!

Cobb, a Texas native, announced on Jan. 31 on Twitter that she’s expecting her first child with husband, actor Donald Faison.

“Looks like [Donald] and I are going to have a little stormtrooper of our own!” wrote Cobb, holding up a blue shirt with an embroidered “Star Wars” soldier on it.

Cobb, 35, married Faison, 38, just last month in a lavish backyard wedding at the home of actor Zach Braff, who costarred with Faison on the hit comedy show “Scrubs” and served as best man at the nuptials.

The couple has been together for six years. Faison also has four children between the ages of 11 and 16, all from previous relationships.

Cobb is sure to get plenty of help getting ready for baby from her best friend – and maid of honor – Jessica Simpson, who recently announced that she is pregnant with her second child by fiance Eric Johnson.