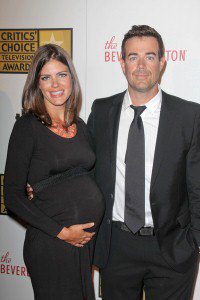 Carson Daly and his wife Siri Pinter are expecting their second child in a matter of weeks, and the TV personality recently let slip the gender of the baby. At a press junket for season three of The Voice, Carson referenced the unborn baby when discussing the enthusiasm of the couple's first child, Jackson.

"Our son is on board," he told Us Weekly Magazine about his 3-year-old. "For a while it was like, 'Does he know another one is coming?' [But now] he talks to her and he's excited by her."

CelebrityBabyScoop.com reports that the duo has been keeping Jackson happy by giving him gifts like Transformers action figures in an effort to get him excited about the prospect of a new sibling. That's one smart move!

While it's been awhile since Siri has been seen out and about flaunting her bump, she looked radiant back in June at the Critic's Choice Television Awards wearing a black dress that she belted above her bump and accessorized with a chic sherbet-orange necklace.

We wish the family luck in the upcoming weeks as they welcome their new baby girl!