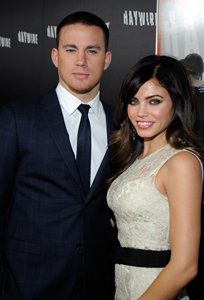 On May 31, actress Jenna Dewan-Tatum and her hubby, Channing Tatum, welcomed their first child together – a bouncing baby girl the couple named Everly.

And a mere two weeks later, the Tatums – who met on the set of their 2006 film, "Step Up" –  showed off their little girl on their respective Facebook pages in celebration of their first shared holiday as a family, Father's Day.

"First Father's Day with my girls!" Tatum, 33, named People magazine's Sexiest Man Alive, wrote alongside a photo of himself cradling his newborn daughter in his arms.

"Thank you everyone for all the loving messages! Chan, myself and Everly are happy as can be and appreciate them all," wrote the star, 32.

Tatum, who recently appeared in "Magic Mike," stars in "White House Down."