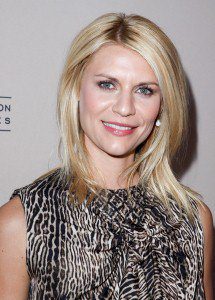 Claire Danes, who won a Golden Globe for her work in Showtime’s hit drama Homeland, is expecting her first child with husband Hugh Dancy. The couple first met in 2007 while filming the movie Evening, and tied the knot in 2009. Now they’re getting ready for baby just after Claire told People Magazine last fall that they had no plans to make a family yet.

“There’s definitely a chance, no plans yet,” she answered when asked if a baby would be on the way. “But yeah, that’d be fun.”

Although the actress’ baby bump will soon make its presence known, she’s still filming the second season of Homeland and the production isn’t expected to be affected by the pregnancy. The Huffington Post reports that a Fox representative declined to comment on speculation that the storyline might actually accommodate Danes’ growing belly.

Those who tune into the show, which premieres on September 30, should be on the lookout for a growing baby bump. Until then, we’ll have to keep an eye out on the red carpet to see what kinds of looks Claire will reveal.