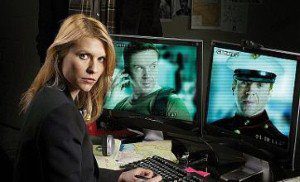 Baby bumps generally aren't apparent during the first trimester of pregnancy, so many moms-to-be can get away with wearing slightly looser clothing as opposed to pregnancy clothes. This is currently the case for Claire Danes, who's been wearing baggy outfits while filming the show Homeland. Her character Carrie isn't pregnant in the show, so they're going to have to start getting creative to conceal her growing belly!

According to the UK's The Daily Mail, Claire was recently spotted shooting scenes for the show's second season. Photos posted on the website show the actress wearing a pair of loose-fitting jeans, a long T-shirt and a purple zip-up hoodie with a pocket right over the place where her bump will be. You wouldn't be able to tell that she's pregnant just looking at those scenes, but apparently she's starting to get bigger.

"It's now getting to the point where I'm looking a little knocked up," Claire said during an appearance on LIVE! with Kelly. "They haven't written it in, but they'll be able to manipulate it in post and do some CGI trickery and make Carrie not so pregnant."