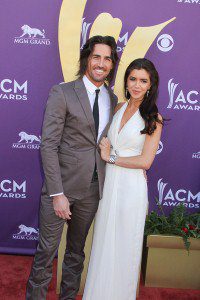 Jake Owen, who’s currently on tour with Tim McGraw and Kenny Chesney, recently learned that his new wife, Lacey, is pregnant with their first child. Not a big fan of surprises, Owen wanted to find out the sex of the baby as soon as possible, seeing as the pregnancy itself was a bit of a surprise. Now they’re set to welcome a girl in November.

According to AceShowBiz.com, the engagement, marriage and pregnancy all came in a whirlwind for the couple, who have had a busy past few months. With a proposal in April, a wedding in May and a pregnancy somewhere around the same time, Owen had a lot on his plate.A

“The way we saw it, the baby news was a bonus on top of the engagement, but we didn’t want anyone to think we were getting married because Lacey was pregnant, and we wanted to celebrate our wedding first,” the country star said.

Now that their secret’s out in the open, Owen hasn’t been hesitant to share his excitement over the news. It’s likely we’ll be hearing more from this pair over the next few months.