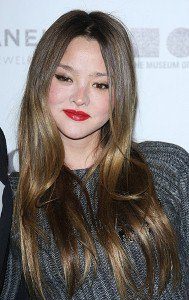 Model and actress Devon Aoki, who's starred in films like "Sin City" and "2 Fast 2 Furious," is expecting her second child with husband James Bailey. The baby girl is due in January, but paparazzi only recently managed to get the first pictures of her bump while the star was shopping in Beverly Hills, California.

Photos posted on CelebrityBabyScoop.com show the 30-year-old looking chic and comfortable in a printed maxi dress that featured a red, blue and black pattern. She topped it off with a navy cardigan buttoned just above her belly, a large floppy beige hat, big sunglasses and an oversized leather bag.

Devon and her husband welcomed their first child, a son named Hunter, in June 2011.

"Celebrating the birth of our son and Devon and my anniversary yesterday is more than I could ever ask for," her husband blogged after the birth of their son. "Our family keeps growing."

Maybe the model/actress will be a little less camera shy in the months leading up to her due date, in which case we may get more great fashion inspiration!