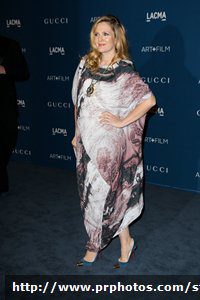 At the recent LACMA Art+Film Gala honoring Martin Scorcese and David Hockney, actress Drew Barrymore showed up wearing a long, flowing printed dress that seemed to resemble chic maternity dresses. It turns out that this outfit choice was, in fact, meant to conceal a growing baby bump, but the actress isn’t being secretive about it.

“Last time I never commented on it and people just stalked me the entire time,” Barrymore told People magazine. “So yes, it’s happening, it’s true. I tried to keep it a secret for as long as possible.”

This will be the second child for the 38-year-old actress and her husband, Will Kopelman. Their daughter Olive was born in September 2012, and Barrymore has mentioned before how she would love to have a big family.

While talking to Jay Leno during a recent appearance on “The Tonight Show,” she told the host that she would love for Olive to have a sibling who’s close in age. When Leno asked if she hoped to have a second child, she was quick to say, “Very much. Right away, yes,” according to ABC News.

Judging by her last pregnancy, we’re sure to see some great maternity fashions from Barrymore this time around, so be on the lookout for fabulous examples of how to dress a baby bump!