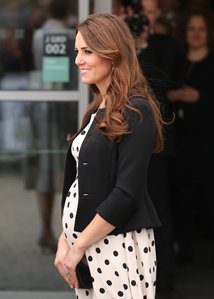 Kate Middleton, the Duchess of Cambridge, has a wardrobe filled with posh maternity formal dresses, but come mid-July, those chic ensembles will be a thing of the past!

According to recent reports, Middleton, who is expecting her first child with her husband, Prince William, the Duke of Cambridge, may deliver the baby on July 13.

"Some of Kate and William's closest pals were at a barbecue hosted by a family friend of the Royals recently," said an anonymous pal of the couple, quoted by the U.K. Mail on Sunday. "They were all discussing the fact that Kate's baby is due to be born on July 13. Everyone was very excited."

The arrival of the baby – who will be third in line to the throne of Great Britain after Charles, Prince of Wales, and Prince William – has been the subject of intense media scrutiny since the pair revealed the pregnancy in 2012.

Whether a boy or girl, Middleton's baby will take precedence in the royal succession over other children she and Prince William have.

For Middleton, who has shown off a variety of elegant maternity clothes, that doesn't leave much time to explore the best pregnancy fashions that summer has to offer!