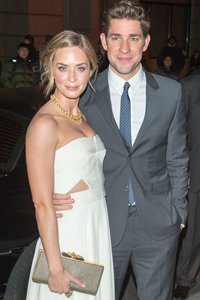 Emily Blunt, of "Looper" and "The Devil Wears Prada" fame, and her husband, John Krasinski, who starred in "The Office," welcomed their first child over the weekend and couldn't wait to share the news with their fans.

"Wanted to let the news out directly," Krasinski tweeted on his page. "Emily and I are so incredibly happy to welcome our daughter Hazel into the world today! Happy bday!"

The 31-year-old actress revealed her pregnancy news back in September and had a lavish baby shower in December. According to the New York Daily News, Jennifer Aniston and Amy Adams were just two of the Hollywood starlets in attendance.

The couple announced their engagement in 2009 after dating since November 2008, then were married in Italy in 2010. Despite their busy work schedules, the duo has been able to foster a loving relationship. Blunt once told the Los Angeles times that, "John and I can talk about everything, and it's nice, because we have a very deep understanding of what the other person does."

We're happy the two finally have some time to themselves to enjoy their new daughter!