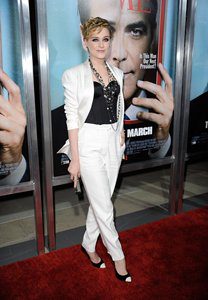 Actress Evan Rachel Wood – who rose to fame as the lead in the drama “Thirteen” and who has since appeared in films such as “Across the Universe” and “The Wrestler” – has announced that she’s expecting her first child with her husband, actor Jamie Bell.

Wood and Bell were married on Oct. 30. The couple, who began dating in 2005 after co-starring in Green Day’s music video for “Wake Me Up When September Ends,” broke up the following year. They reunited in 2011, after Wood broke it off with musician Marilyn Manson, whom she was previously engaged to.

After getting married, rumors flew that Wood and Bell were expecting, which the duo initially denied.

Talking to fans on Twitter, Wood addressed the rumors and announced her pregnancy in one fell swoop on Jan. 11. “Remember when I said, ‘No baby on the way here?’” wrote Wood. “Well I didn’t know there actually was!”

Along with her announcement, Wood posted a photograph of the book, “What to Expect When You’re Expecting.”

Although Wood and Bell have yet to confirm the baby’s due date, the next few months are bound to be full of excitement for the first-time parents!