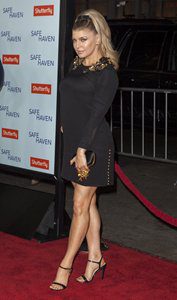 Singer Stacy "Fergie" Ferguson of the Black Eyed Peas and her actor hubby Josh Duhamel made a big announcement over the weekend, revealing that they're expecting their first child!

The couple, who started dating in 2004 and wed in January 2009, have spoken in the past about their desire to have a family, yet their busy schedules – Duhamel has appeared in all three "Transformers" films and currently stars in the film "Safe Haven" – have kept that goal on the backburner.

Fergie rose to fame with the Black Eyed Peas, joining the band for their 2003 album "Elephunk." After the success of songs like "Don't Phunk with my Heart" and "My Humps," the songstress branched out with a solo album in 2006. The album spawned such hits as "Big Girls Don't Cry" and "London Bridge."

The singer is equally well-known for her dynamic sense of fashion, and with her little guy or gal on the way, Fergie's sure to impress with the sexiest maternity clothes around!