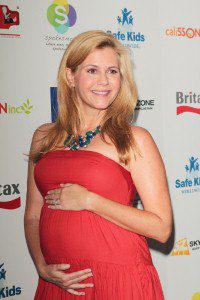 Actress Christie Lynn Smith had a special present from Santa Claus this holiday season. The star, who appears on the long-running ABC soap opera, "General Hospital," gave birth to a bouncing baby boy on Dec. 22 in Burbank, California.

Smith and husband John Fortson welcomed little Joshua Taylor, who weighed in at 7 pounds, 4 ounces and is 20 inches long.

"He has beautiful blue eyes, a button nose and the sweetest lips and the softest brown hair. I'm in love with this little guy," Smith revealed to Celebrity Baby Scoop.

Joshua joins big sister Abby, who is 4 years old and more than eager to pitch in and help care for the newborn.

According to Smith, she and her husband have been eager to include their daughter in the caring of little Joshua as much as possible.

In addition to "General Hospital," Smith has appeared in a variety of film and television roles, including "Dexter," "Weeds," and "Bones." In 2010, she starred in "The Crazies," a remake of a classic horror film by Wes Craven.