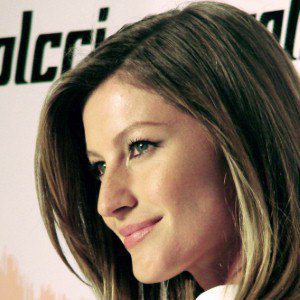 Following in the footsteps of her fellow Victoria’s Secret angels, Gisele Bundchen seems to be staying in great shape during her pregnancy. She might not be gracing the runways with her bump like Alessandra Ambrosio, but she’s definitely been taking advantage of exercise while pregnant. Recently, she was seen in Boston walking with her 2-year-old son Benjamin and later toting him around on a bicycle.

Photos posted on the UK’s The Daily Mail website show the Brazilian beauty pushing Benjamin in a stroller along the Charles River and chatting with a friend, who was also pushing her child. The model mama brought her large brown dog along for the stroll too while sporting a big green coat, black pants and a black top.

The next day, Gisele rode a bike in the same area with Benjamin sitting in a seat on the back. She looked cute and sporty in a gray zip-up hoodie, gray sweatpants, a gray baseball hat and white sneakers. Her wavy ponytail flowed behind her as she pedaled.

The new addition will be Gisele’s second child with husband Tom Brady. The New England Patriots quarterback also has a 4-year-old son named Jack from a previous relationship.