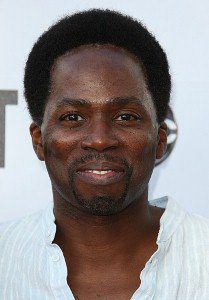 Harold Perrineau, best known for his roles as Augustus Hill on the HBO series Oz and Michael Dawson on ABC's Lost, is expecting his third child with his wife Brittany. The 49-year-old actor is already father to two daughters, 18-year-old Aurora Robinson and 4-year-old Wynter Aria.

The couple's representative told People Magazine that they're expecting their new addition sometime at the end of the winter season. This will definitely add new meaning to the word "busy," as both parents are currently working on individual projects.

Along with playing Damon Pope on FX's Sons of Anarchy, Harold will be starring opposite Brian Austin Green in Wedding Band, a new series on TBS. The news source reports that Brittany is the co-creator of a children's bath and shampoo line called Ice Cream Heads that's set to launch in October.

At the beginning of September, photos of the couple and their youngest daughter were posted on CelebrityBabyScoop.com. They were seen walking in The Grove in West Hollywood, California, and Brittany's baby bump had yet to make an appearance. Perhaps we'll be seeing more of it over the next few months of her pregnancy!