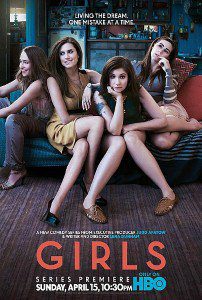 Jemima Kirke, who plays Jessa Johansson on HBO’s new series Girls, is gearing up for her second pregnancy. The star and her husband, attorney Michael Mosberg, are already parents to 20-month-old daughter Rafaella.

According to Access Hollywood, the British actress gave birth to her first child just six weeks before shooting the pilot episode of Girls. When creator Lena Dunham asked her to be in the show, Jemima was hesitant at first.

“I said, ‘Are you kidding? I will have just had this baby and be 30 pounds overweight.’ But I did it,” she told The Glow.

As for what kinds of fashions Kirke relies on to cover her baby bump, she’s found that what she imagined would be her go-to pregnancy clothes aren’t actually the most comfortable.

“I wanted to dress in a bohemian way, but the reality was leggings,” she told The Glow.

We can understand where she’s coming from – leggings certainly are more comfortable than jeans, and luckily they go with all kinds of flowy tops. We can’t wait to see what kinds of outfits Kirke puts together this time around!