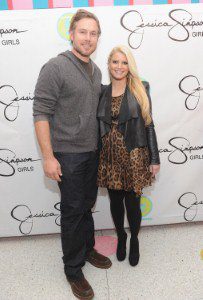 Last month it was pure speculation, but now congratulations are officially in order for singer Jessica Simpson and her ex-NFL fiance Eric Johnson, who are expecting their second baby!

Simpson, who appeared on the hit reality show, "Newlyweds," with former husband Nick Lachey as well as "The Dukes of Hazzard," gave birth to the couple's first child, Maxwell Drew Johnson, in May 2012.

"Merry Christmas from my family to yours!" Simpson wrote on Dec. 25 on Twitter, along with an adorable photo of her seven-month-old daughter with the phrase, "Big Sis," written in sand in front of her.

The Texas-born star announced her first pregnancy in similar bold fashion back in October 2011, posting a photograph of herself in head-to-toe bandaging with the caption declaring, "It's true – I'm going to be a mummy!"

Now that's she's officially expecting, Simpson – who received $3 million to act as a celebrity spokeswoman – will no longer be following a Weight Watcher's diet.

Simpson has made a big impact in the world of fashion as a designer and showed off a variety of great pregnancy clothes throughout her first pregnancy. From maxi dresses to sensational frocks, Simpson looked positively radiant in her attire and set a great example for moms-to-be who are still eager to be fashionistas!