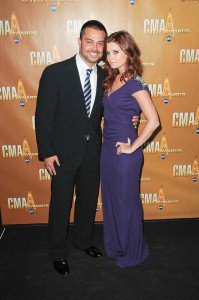 JoAnna Garcia Swisher, the actress known for her roles on Reba, Better With You and Animal Practice, is expecting her first child with husband Nick Swisher, an outfielder for the New York Yankees. The 33-year-old star and her 31-year-old hubby are beyond excited at the prospect of welcoming their baby next spring.

"Words can't describe how blessed we feel to be expanding our family and [we] are anxiously awaiting the arrival of our new addition," they wrote on Nick's Facebook page.

In a recent interview with Us Weekly magazine about the contents of her purse, JoAnna hinted at pregnancy cravings when she went into detail about her sugar fixes. Apparently, she always carries around peanut M&M's and Nerds to snack on and has an unlimited supply at home to quell her sweet tooth.

The couple got engaged in 2009 and wed in December of 2010. Nick has spoken to People magazine in the past about their strong relationship, which hopefully will only improve now that they've taken it to the next level!