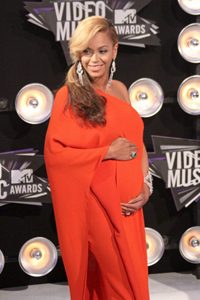 Most people remember how Beyonce revealed her pregnancy a few months ago at the MTV Video Music Awards, where she gave a stunning live performance (a baby bump won’t stop this star from taking the stage!). However, it seems as though the Single Ladies pop singer won’t have the chance to dramatically reveal her impending arrival’s gender – in a recent interview with US Weekly, Kelly Rowland divulged that Beyonce is expecting a baby girl.

At the Cosmpolitan Awards in London, Rowland spoke of the child and told the news source, “I think she’ll be very well behaved. Her parents will make sure of that.”

Beyonce and Jay-Z have already demonstrated that they will make sure to provide her the best that money can buy – it is rumored that they are building her a 2,200 ft nursery in New York City. This is the first pregnancy for the famous duo, who together represent one of the most epic music couplings of the modern era.

Even though celebrity pregnancies are often closely followed, there is a significant amount of public information surrounding the child considering her parents are known to be very private about their personal lives.