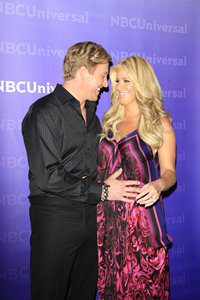 Kim Zolciak, former star of "Real Housewives of Atlanta" and singer of "Don't be Tardy," just announced that she's pregnant – with twins!

"I'm having twins and I couldn't be more excited," Zolciak, 35, told E! News. "I was completely shocked. I had no idea. It was a natural conception, but twins do run in the family, so I guess I shouldn't have been surprised."

The star is the furthest thing from a first time mother, with four kids already at home with husband and Atlanta Falcons player Kroy Biermann.

According to Hollywood Life, Kim's friends are worried that she's going to have so many young kids in the house at once. After all, her oldest child, Brielle, is only 16, and her youngest, Kash, just turned 1. But we bet that she'll do amazing as a mom of six, and in the end, her friends do too. They told the news source that they know she'll have a great household because of how much love she has to give.