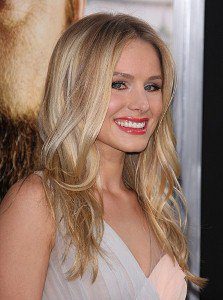 "House of Lies" actress Kristen Bell made headlines recently when she announced that she and fiance Dax Shepard of "Parenthood" are expecting their first child. Since making the remarkable announcement, Bell has shown off a versatile selection of pregnancy clothing!

At the Sundance Institute Feature Film Program Reading of "Life Partners" in Culver City, California, Bell arrived in a gray sweater that concealed her growing baby bump, and looked amazing in the process.

"I thought there was no cute maternity wear," Bell wrote on Twitter on December 8. "I was mistaken."

Bell and Shepard expect their little one to arrive in the spring of 2013, giving them plenty of time to get ready before the baby arrives. Until then, Bell seems to be enjoying her pregnancy, joking during a recent interview with CBS Detroit's Stoney and Bill that she's "…pretty far [into pregnancy]. I'm about 367 pounds."

No matter what she's weighing in, Bell seemed calm and collected on December 12, when she was photographed wearing jeans, several layers of clothing including a jacket and t-shirt and high-top sneakers. Her casual clothing is a definite source of inspiration for laidback moms-to-be looking to stay comfortable throughout the next trimester!