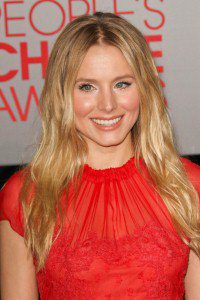 Kristen Bell, who stars in House of Lies, and her funnyman fiance, actor Dax Shepard, are expecting their first child sometime in late spring. The couple has been dating since 2007 and got engaged two years later. Despite holding off on marriage for political reasons, the two stars are more than ready to become parents.

"They're so excited – they're both ecstatic," a close friend of the couple told People magazine. "They can't wait to become parents."

The source also revealed that although Kristen was experiencing morning sickness early in the pregnancy, she's been feeling great while shooting the second season of House of Lies.

While Dax and his beautiful blonde fiancee were promoting their new film Hit and Run in August, the actor pointed out that having children out of wedlock isn't an issue for them, reports Us Weekly magazine. The only reason they haven't tied the knot is because they're holding out until same-sex marriage is legal in their home state of California.

Surely, we'll get to see how Kristen styles her bump this winter as she makes appearances on the red carpet. And of course, her glow will be evident during season two of her show!