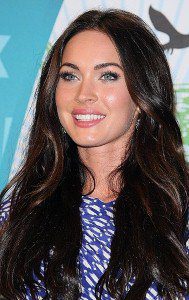 Actress Megan Fox is living proof that pregnancy clothing doesn’t have to be shapeless, baggy or unflattering. Instead of opting for flat flip flops and breezy outfits this summer, she’s been out and about flaunting her bump in pretty dresses and high wedge heels.

According to the UK’s Daily Mirror, Megan and her husband Brian Austen Green recently went to church in Los Angeles, California, and the star was dressed to impressed. She wore a black maxidress with cap sleeves, which showed off her growing bump, accessorizing with two necklaces and a fashionable pair of Jean-Michel Cazabat wedge heels that tied around her ankles.

With such heightened footwear, it’s a good thing Brian’s there by her side to offer a hand if need be. Green has apparently been “super protective of her,” one source told Us Weekly Magazine. “He really wants to take care of her and make sure she is as happy as can be.”

Although the couple has yet to make an official announcement, they revealed photographs of their Hawaiian vacation in June, in which Megan’s bump was put on display. It’s growing even bigger these days, but it’s obvious that she’s having no trouble finding trendy outfits to wear during her pregnancy.