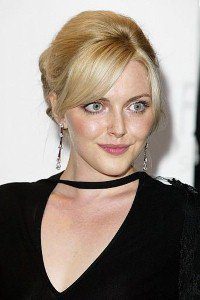 Sophie Dahl, the British model and author who also happens to be the granddaughter of Roald Dahl (author of Charlie and the Chocolate Factory), is expecting her second child with her jazz musician husband, Jamie Cullum. The 35-year-old gave birth to her first child, Lyra, in March 2011. She made her bump debut at the Harper's Bazaar Woman of the Year Awards 2012 at Claridge's Hotel in London, England.

Photos posted on the Daily Mirror's website show the blonde beauty wearing a loose-fitting black tunic with intricate blue and green patterns, a pair of black tights, green flats with bow details and a sparkly green bag. She swept her hair back into an effortless updo, parting her bangs on the side and leaving wispy pieces around her face.

According to The Daily Mail, Sophie took a break from modeling to put more effort into her cooking show, The Delicious Miss Dahl. She's also been focusing on her writing, but recently announced that she's the new face of the Aubin & Wills' autumn campaign. Now that a little one's on the way though, she might have to put her modeling career on the back burner again.