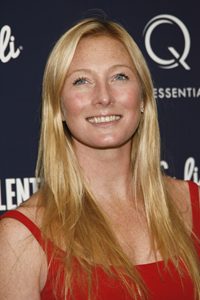 The fresh-faced, freckled Maggie Rizer, who has graced the cover of Vogue and walked in Victoria’s Secret runway shows, is anxiously awaiting giving birth to her first child – a boy. Rizer and her husband, IBM heir Alex Mehran, announced the pregnancy in June via the mom-to-be’s blog Beamakesthree.com.

It turns out that Bea, one of the couple’s three Golden retrievers, has proven to be a listening ear throughout the pregnancy, according to Rizer.

“I’ve been telling Bea about her brother for so long now that she’s starting to wonder if I’m lying,” she writes on her blog.

According to the leggy lady, five of her close friends had overlapping pregnancies, but she is the last of the bunch to deliver, leaving the statuesque beauty ever more anxious to welcome her own child into the world. The most recent delivery of the group happened in early November and Rizer’s due date falls just after Thanksgiving.

Still, although her pregnancy has made it necessary for her to skip her usual trip to the East Coast to spend the holiday with her family, Rizer refuses to let it hamper her hosting abilities.

“I have decided to stand firm on my theory that there’s very little chance that any child of mine will be early,” she writes on her blog.

Fellow Victoria’s Secret models Adriana Lima and Gisele Bündchen had autumn due dates as well. Lima gave birth to a baby girl in November 2009 and Bündchen delivered a boy in December of the same year. Both of these working moms continued to grace the runway when they were pregnant – their baby bumps attracted even more commercial attention.