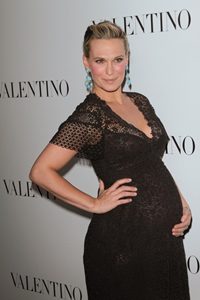 Molly Sims and her husband, Scott Stuber, announced back in January that they were expecting their first child in June. Ever since then, she’s been flaunting her baby bump all over the place – even on the red carpet!

Recently, the leggy lady showed up to the Valentino flagship opening in Beverly Hills wearing a black lace gown that showed off her surprisingly big belly. A pair of turquoise dangling earrings accentuated her glowing complexion. She definitely looked like one happy mama.

It’s official: the actress and model’s unborn child is a boy! Although Sims has remained relatively vocal about her pregnancy, no one knew what sex the baby was until she broke the news.

According to People Magazine, Sims made the announcement during a recent appearance on The Talk, mentioning to the co-hosts: “The only reason why I’m telling this is because we can’t make a decision on the nursery.” It’s definitely helpful to know whether you’re having a boy or a girl when gathering things you need for a new baby!