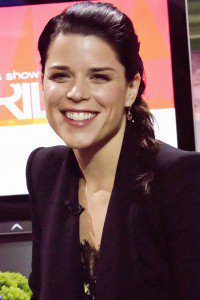 Neve Campbell and her boyfriend J.J. Feild are expecting their first child in July, and her bump has the size to confirm it. According to images posted on CelebrityBabyScoop.com, the couple was recently spotted in Santa Monica, California, walking their little shih-tzus.

The actress was dressed in casual pregnancy clothes, wearing a loose, flowing gray sweatshirt, black flared sweatpants, sneakers and a hat. She also carried a pair of sunglasses, holding one of the dog’s leashes in her other hand.

While the former Scream actress certainly adores her dogs, her rep confirmed to People Magazine back in March that she and her boyfriend are both “thrilled” at the prospect of their new baby. When Neve made the announcement on Twitter, she certainly seemed excited.

“Thanks to everyone for the congratulations! I’m very happy, and I’m even happier to know that people come to my life because I like my work!” she tweeted on her page.

Campbell was also apparently gushing about her pregnancy to her castmates on the Lifetime movie she’s been filming in Toronto called Sworn to Silence, reports The Daily Mail. It seems like she just can’t contain that happiness!