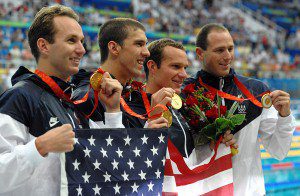 Just in time for the London 2012 Summer OIympics, champion swimmer Brendan Hansen found out that he and his wife, Martha, are expecting their first child. How’s that for motivation? The four-time Olympic gold medalist took to his Twitter account to share the excitement with his fans.

“Well the news is out! My wife Martha Hansen and I are expecting! Hope the [world’s] ready for a lil Hansen runnin around!” he wrote in the tweet.

According to Us Weekly magazine, Martha told Brendan about the news early one morning before he left for a workout, racing down the stairs with the positive pregnancy test in hand. “To this day it is still the fastest I’ve seen her move that early in the morning!” the athlete told the magazine about the event.

Hansen retired from swimming after 2008’s Beijing Olympics, but Martha was the one who encouraged him to keep competing, pointing out that he might regret not doing so once they’re settled down later in life with their kids.

The New York Times reports that the couple is going to try to wait until after the games to find out if they’re having a boy or a girl. We’ll see if they end up breaking down and revealing the news before then!