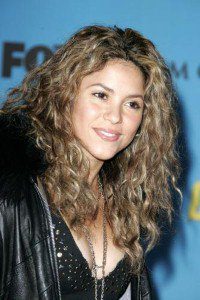 Although Shakira postponed several performances and appearances after making the announcement that she's pregnant with her first child, it seems she's back to her old ways. The 35-year-old Colombian singer recently took the stage at the closing ceremony of the FIFA U-17 Women's World Cup in Baku, Azerbaijan, then performed the next night at Baku's Crystal Hall, reports The Huffington Post.

"In a few minutes it will be our baby's first time on a stage and it's going to be at a soccer event! Magical. Shak," the star tweeted before the event. Her boyfriend, Gerard Piqué, plays soccer himself, which explains why she felt that performing with her bump at the event was so perfect.

In true rock-star style, the blonde babe donned a pair of black leather leggings, knee-high boots, a black shirt with glittery embellishments on the front and a black leather studded bracelet. She kept her long blonde hair down and wavy and had a great time flipping it around during the show.

Despite the fact that Shakira had to make a few allowances for her bump in her dance moves, the source reports that fans were still impressed with her dance skills. Hey, if she can go out there and strut her stuff, you shouldn't feel embarrassed about rocking out during your pregnancy next time you get the chance!