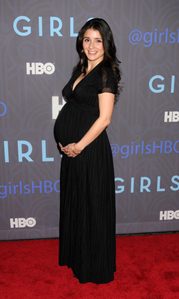 Actress Shiri Appleby, who appears on the hit show, "Girls," is currently expecting her first child with fiance Jon Shook. But until the baby arrives, the couple is spending all the time that they can together, including taking trips to the beach.

"T minus 20 days," said the 34-year-old mom-to-be after releasing a photo on Instagram of herself in a two-piece bikini.

When it comes to stylish maternity clothes, you really can't do better than a cute blue bathing suit, especially if you live near the water!

While Appleby – who also starred in "Roswell" – was all too proud to show off her burgeoning bump, the actress has decided to keep her baby's gender under wraps until the delivery.

"He really wanted to do it and it sounded like fun," said Appleby of the decision. "It's really made the whole pregnancy a heightened excitement because you just don't know what it's going to be!"

That's not all the star had to celebrate recently – close friend and "The Mentalist" star Robin Tunney recently hosted a baby shower in her honor at the L.A. eatery, Animal, on Jan. 27.

About 50 of her friends were there to toast the arrival and help her get the things you need for a new baby.