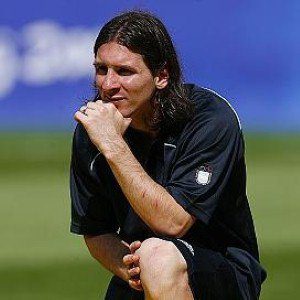 Although Lionel Messi is known for his silence when it comes to the media, he decided to put the rumors to rest about his pregnancy with girlfriend Antonella Roccuzzo. The couple is expecting their first child and both are overjoyed at the prospect.

“We did not want to say anything because we never talk about our private life,” the soccer star said. “But we were constantly asked about it, so we wanted to share our joy.”

According to Metro UK, the Argentina star – who also plays for Barcelona – was caught off-guard at a press conference recently when a journalist brought up the subject of the pregnancy, not saying much to deny or confirm the rumors.

However, during Argentina’s 4-0 win over Ecuador soon afterward, Messi celebrated a goal by putting the soccer ball underneath his shirt, mimicking a baby bump. He then gestured to the crowd and called attention to himself.

Goal.com reports that the 24-year-old is already making predictions about the sex of the baby, saying that he’s sure it will be a boy. We’ll have to wait and see if he’s right!