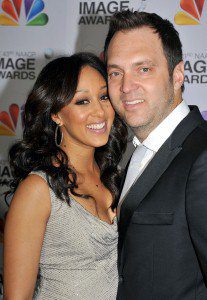 Tamera Mowry-Housley is proof that sometimes, with enough wishing, you can get exactly what you want. After telling the world that she and husband Adam Housley would love to have a baby boy right after making the pregnancy announcement, it seems the odds are in her favor – she’ll be welcoming one this fall.

“We would love for it to be a boy,” she told MyStyle.com back in April. “I want a boy because I have two brothers, whom I love and adore. I helped raise my brothers, so I have somewhat of an experience raising boys.”

The actress is very excited about being pregnant, and she recently tweeted a picture of herself staring down at her belly, cradling her expanding bump while wearing a black and white printed halter top and a chic topknot.

“Loving my baby bump. I’m obsessed with rubbing it:),” she wrote as a caption on the image.